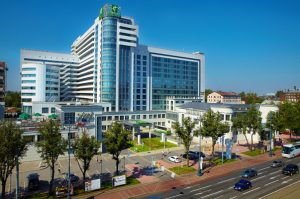 It’s a modern hotel located in a peaceful small district in the central part of St. Petersburg.

Across the road from the hotel, there is Moskovskye Vorota metro station wherefrom it takes 10 minutes to get to the Nevsky Prospekt, the Hermitage and other sights.

Pulkovo Airport is 10 km away and Moskovsky Railway Station – only 5 km.

The hotel is a part of InterContinental Hotels Group (IHG), the world leader for the number of hotels – 4400 hotels in 100 coutries.

16 conference rooms and halls with capacity from 10 to 800 pax, restaurants and bars are situated in the hotel.

Free Wi-Fi is available in all public zones.

How to get here and park:

Underground parking: is available 24/7, charge for parking: 100RUB per hour, advance booking is not required